A colleague of mine recently needed to represent DAGs (directed acyclic graphs) in Coq, and asked around for ideas. Since Coq is not a nice language to program in, I decided to use Haskell instead. Something close to dependently typed programming is possible in Haskell thanks to GADTs. And other extensions will be helpful too,

My idea is to represent a DAG as a list of nodes. Nodes have a list of children, where each child is a reference to an element later in the list.

For example, the DAG 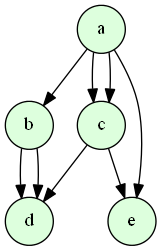 would be represented as

To make the above representation safe, we need to ensure two things:

The first condition is easily satisfied, by making the reference relative to the current position and using natural numbers. So the representation would be

For the second condition we need dependent types. In particular the type Fin n of numbers smaller than n.

A node then holds a label of type a and a list of numbers less than n.

For the list of nodes we will use a dependently typed vector,

I would like to define Eq and Show instances for these datatypes. But the instance for Vec would look something like

which is not valid Haskell, even with extensions. The solution is to use another class, Eq1

Now we can define

The boring instances for Node and Fin are

The same goes for Show

To show that these DAGs work, we can convert from a DAG to a tree by duplicating all nodes. The tree type is a simple rose tree, as those in Data.Tree:

To be able to make a dag into a tree, we need to know the root node. So we give the toTree a DAG n and an Fin n to indicate the root.

And for convenience, a function that assumes that the first node in the list is the root.

Here is the example from above 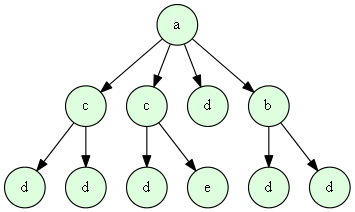 Convert from a tree

More interesting is the conversion from a tree to a DAG, in such a way that we share identical nodes. For that we first of all need to be able to search a DAG to see if it already contains a particular node.

Let's do this a bit more generic, and define a search over any Vec f.

What is that Pred1 class? And why do we need it? When you have a value of type f n, and you want to compare it to the elements of a vector, you will quickly discover that these elements have different types, f m with m < n. So, we need to either convert the f n to the f m or vice-versa.

I'll go with the former, because that means the search can stop early. If a node refers to a child Fin0, that means it points to the first node in the DAG. So there is no point in looking if it is duplicated anywhere in vector, because other nodes can't possibly refer to earlier ones.

What the Pred1 class does is tell you: "if this item occurred one place later in the vector, what would it look like?". And if it can not occur in later places return Nothing:

The nice thing about GADTs is that it becomes almost impossible to make mistakes, because the typechecker will complain if you do.

When converting a Tree to a DAG, we do not know beforehand how many nodes that DAG is going to have. Therefore, we need to put the produced DAG into an existential box, that hides the parameter n.

That is fine for the end result, but it will not work when incrementally constructing a DAG. Suppose you wanted to add two nodes to a DAG. Adding the first node is fine, but then you need to ensure that the children of the second node are still there. In addition, the second node will need to be adjusted: all child references have to be incremented, to skip the first added node.

That adjusting is done with the the counterpart to Pred1, the Succ1 class

Our box will come with the ability to 'lift' any succable value into it:

You can think of Box f n as a value of f m where m >= n. This allows turning any g n into a g m, which can be combined with the value in the box. Before we can see Box in action, we will first need some functors to store things:

Now when adding a node we check if it is already in the DAG, and if so, return the index. If the node is not yet in the DAG, then add it. By adding the node the DAG becomes 1 larger, from a DAG n we get a DAG (Succ n). Therefore, we need one level of succ.

At the top level we start with an empty DAG, and ignore the index of the root (which will always be Fin0).

To understand these functions, you should ignore the Box constructors, what you are left with is

Here is a test that shows that we are able to recover the sharing that was removed by toTree':

Box is a monad

All this wrapping and unwrapping of Box is really ugly. It should also remind you of something. That something is a monad. And Box is indeed a monad, just not a normal Haskell one. Instead it is (surprise, surprise) a 'Monad1':

Combine this with two utility functions:

And one more Succ1 instance:

Now we can write this slightly less ugly code

This might be even nicer when we add in a state monad for the DAG, but I'll leave that for (maybe) another time.

If you don't like existential boxes, then here is another way to define the Box monad.

The two types are equivalent, as shown by

Nice article, from memory Agda's Data.Graph library does something similar for finite graphs. A slight error - in the second and third code blocks there are two "d" nodes, the second node should be "e".

Could you explain why Fin is numbers smaller than n?

What am I missing?

You shouldn't read it as an implication. If you make the n type parameter explicit, you get:

I see what you are saying, I admit that I am still missing your intuition. I don't see how you go from the type-definition to your verbal explanation.

Trying to clarify this more mechanically:

Is this correct? How does that get to your intuition? How does 'Zero' ever enter the story?

Termination doesn't become an issue, because it is up to the user of the type what n is in Fin (Succ n). Just like a regular type, say [a] is not a problem. It can be instantiated to [Int], but also to [[[[Int]]]].

Together the two constructors mean that a value of type Fin m can either be Fin0, but only if m ~ Succ n; or it can look like FinS x, but only if x :: Fin n and m ~ Succ n. If you have trouble understanding how this makes Fin n the type of numbers less than n, try to work out for yourself what the possible values of Fin (Succ (Succ Zero)) are.

Is this correct? How does that get to your intuition? How does 'Zero' ever enter the story?

It doesn't really, except in the sense that Fin0 can be of type Fin0 :: Succ Zero or Fin0 :: Succ (Succ Zero), etc. Unfortunately in Haskell there is no kind system to prevent you from writing Fin0 :: Succ Banana.

I fiddled about transposing this to use the new 'kind promotion' in ghc-7.4, so you just use `data Nat = Zero | Succ Nat` This excludes `Fin0 :: Fin (Succ Banana)` but permits `Fin0 :: Fin ('Succ 'Zero)` (using an apostrophe to mark the 'promotion' of constructors into the type system). It only took a few changes before everything compiled. I didn't get to the point of reasoning whether it would suggest a different approach to `fromTree` and `toTree` and so on.

End of last year I started implementing a graph unification algorithm with underlying Hamana-style typed search trees that can represent sharing and cycles. Added the mildly interesting feature that any non-pointer node represents a fresh {symbol, variable}. The code is here: http://code.google.com/p/omega/source/browse/mosaic/Unify.lhs

Unfortunately in Haskell there is no kind system to prevent you from writing Fin0 :: Succ Banana.

You can restrict it using Type Classes.

Jorge, you can do with with the kind system of ghc-7.4 as I show in my simple-minded paste, http://hpaste.org/65615 -- with the addition of data Banana = Banana

Yes applicative. That was quite interesting, I didn't know about kind promotion. But I thought I'd present my solution in any case, since it relies on a much more well established extension.

Although I have to be honest and say that, as a first impression of kind polymorphism, it seems a bit confusing to see value constructors as types and types as kinds, on what is not supposed to be a language with dependent types. But I'll have to use it a bit before making up my mind.